Student Turns a Hobby Into a Business 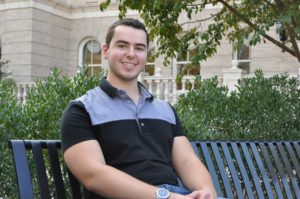 Hackettstown, N.J., October 25, 2016 – When first-year student Justin Dalcourt took his Academic Foundations: Perspectives in Business course with Assistant Professor of Business and Director of Enactus, Dr. Linda Poisseroux, last fall, he was charged with creating, promoting and selling a product. He was at a loss of how to tackle this project when a friend of his suggested that he sell his pumpkin pie pudding that he would make for friends and family.

“I love pumpkin pie and pudding and this was something that I had developed long ago,” says Dalcourt, who is a resident of Sparta, N.J. “Never did I think that it would be the inspiration for a sustainable business.”

As part of this assignment, Dalcourt was tasked with selling the product. He chose to do this at the Hope Christmas Craft Fair. During the first three hours, he did not sell a single item. By the end of a two-day period, however, he sold $800 worth of pudding.

“I thought my friends were just being nice when they used to compliment me on my pudding,” he says. “Once I sold that amount in just two days, however, I knew I could not stop there.”

Today, with the help of his mother, Diane, who is in charge of packaging, Dalcourt has developed and currently sells 27 different flavors of pudding, as well as pudolis, which is the pudding version of a cannoli. He now caters for special events and his products are sold at various delis and restaurants. He has sold to several hundred clients and works with 75 regular clients on a monthly basis. All of his products are allergy and peanut free.

“Justin’s success is an inspiration to any student who has aspirations of becoming an entrepreneur,” says Dr. Poisseroux. “He saw a window of opportunity in his AFC class and was determined and committed to take advantage of it and it changed everything for him. I am very proud of his accomplishments.”

Although it is challenging to maintain a full-time schedule at Centenary and cultivate his growing business, Dalcourt has every intention to bring Dalcourt Desserts to the next level. His short-term goal is to open a store in the Hackettstown area in 2017.

Dalcourt maintains a positive attitude and credits famous cook and author, Steve Martorano, who wrote the book “It Ain’t Sauce, It is Gravy” as a role model. Martorano got his start selling his food and gravy out of his basement and is now an international sensation. He also attributes his positive can-do attitude with his own ability to overcome weight issues when he was a young child through discipline and hard work. Dalcourt’s Desserts can be found on www.dalcourtsdesserts.com, as well as on Facebook and Instagram.

Founded in 1867 by the Newark Conference of the United Methodist Church, CentenaryUniversity is an independent, coeducational liberal arts and career studies university distinguished by an accomplished faculty, small class size and diverse student body. Centenary is the only baccalaureate and master’s degree granting institution in northwest New Jersey.

Centenary University’s main campus is located in Hackettstown, N.J., with its equestrian facility in Washington Township (Morris County). The Centenary University School of Professional Studies offers degree programs in two locations: Parsippany and Edison, and at corporate sites throughout New Jersey. The School of International Programs recruits international students for study at Centenary and Centenary students for study abroad.