Professionals Who Founded the Black Professional Zone in Westfield, NJ

Film by Centenary University student Isaiah Anderson was recognized with the 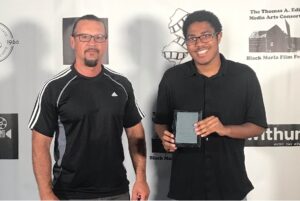 HACKETTSTOWN, N.J., Oct. 19, 2021— Growing up in Westfield, NJ, Isaiah was one of only a few students of color in his elementary school. So, he was surprised to learn that his hometown once had a thriving district known as the Black Professional Zone, which included the homes and businesses of prominent African American families from the 1940s through the 1970s.

The Centenary University junior’s documentary, Black Professional Zone, was recently awarded a Director’s Choice Award at the 47th New Jersey Young Filmmakers Festival held in Hoboken. A communication major with a minor in television and film, Anderson created the eight-minute film for a class called Documentary Indie Films. Assistant Professor of Communication Boris Gavrilovic encouraged him to enter the competition. “I was excited when I won the award, and honestly, proud of my hard work,” Anderson said.

Inspired by a 2020 walking tour on African American history for Westfield’s 300th anniversary, Anderson set out to chronicle the founding of the zone through some of the first professional offices established there. The founders of these businesses, many of whom were doctors and dentists, made a lasting impact on Westfield and its residents, as well as the nation. The film highlights several of them, including:

Anderson’s interest in photography and film was sparked by a high school photography class. He has an eye condition called cortical visual impairment, which causes him to see things as if they’re in a broken mirror, but has learned to compensate through vision therapy. “When I was in high school, my photos were always slanted,” explained Anderson, a member of the Honors Program at Centenary. “I’ve gotten much better at it now, and when I’m shooting video, there are no issues.”

Since bright colors can assist those with this visual impairment to read, he was drawn to comic books as a young child. “Comic books taught me to read,” Anderson recalled, adding that teachers who didn’t understand his condition took away the comic books. Instead, he created his own. Today, he is working on a series called “Nightwing Beyond,” which focuses on a teenage crimefighter who is the son of Dick Grayson, Batman’s first sidekick.

Looking back on filming his documentary, Anderson said the experience has helped him to reconnect with his hometown and feel pride in the accomplishments of the Black professionals who helped to shape the community: “I did not know this history was here. Now, I feel like I’m really part of Westfield.”