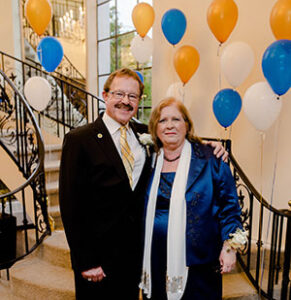 “Dr. Murphy and his wife, Jeanne, are both US Army veterans who have been so supportive of Centenary’s many programs for active duty and retired military,” said Major Paffendorf (US Army, Retired), who serves as the director of Operation Centaur, which is part of the University’s broader Therapeutic Riding at Centenary (TRAC) program, an equestrian program for at-risk youth, seniors, and people with disabilities. “Nancy and I wanted to honor their commitment to veterans by showing our support for this new scholarship, which will allow veterans to participate in Operation Centaur free of charge.” Mrs. Paffendorf added, “This program is a labor of love for George.”

The Mount Olive couple decided to offer a challenge toward this grassroots fundraising effort called “I Give A Buck,” emphasizing that modest efforts by a group of people can make a difference in the lives of others. The initiative—spearheaded by the University’s offices of Community Service, Veteran Relations, and Advancement—featured an educational service project, including two weeks of lectures focusing on posttraumatic stress disorder (PTSD) and other special needs of veterans, and concluding with a virtual walk to raise awareness and funding. With a goal of $1,400 (for the 14th University president) the Paffendorfs provided a $700 matching gift to encourage participation.

The initiative smashed the original goal, to date exceeding that amount by 467%—including a $2,000 contribution from another TRAC volunteer who wants to remain anonymous and a surprising canine gift. Guideaux, a Coton de Tulear owned by Dr. Murphy and his wife, Jeanne, made a lead gift of his own to help establish the Dr. Bruce and Jeanne Murphy Inaugural Operation Centaur Scholarship to enhance access to the therapeutic riding program for veterans.

Inaugurated as Centenary’s 14th president in January, Dr. Murphy is a US Army veteran who retired with the rank of lieutenant colonel. Mrs. Murphy is also a US Army veteran, who held the rank of colonel upon her retirement. Together, they have championed academic programs for veterans at Centenary, as well as Operation Centaur. Dr. Murphy said, “Jeanne and I couldn’t be prouder to have this scholarship named in our honor. The veterans who enroll in Operation Centaur have served their country well. When they’re discharged, they need help re-establishing their lives. I’m proud that Centenary University is here to offer academic and therapeutic support to these brave men and women.”

When asked to provide details about Guideaux’s generous contribution, Mrs. Murphy added, “Guideaux is a pretty modest guy, so he won’t publicly disclose the level of his support. Rest assured, he received a nice treat after announcing his intent.”

Operation Centaur also holds a special place in the hearts of the Paffendorfs, who are recipients of the University’s prestigious Gold Dome Award. An honorary member of Centenary’s Class of 2007, Major Paffendorf assists in all aspects of TRAC. He retired as a major in the U.S. Army and served as New Jersey’s state director of youth programs and special initiatives before his retirement from the State of New Jersey. A member of the Essex Troop, Major Paffendorf was knighted to the Order of St. George by the United States Cavalry and Armor Association.

Mrs. Paffendorf is the recipient of three Centenary degrees—an associate degree in 1979, a bachelor’s in 1981, and a master’s in 2006. She retired in 2018 as the University’s dean for community and university engagement. Mrs. Paffendorf has also served as a member of the Alumni Association Executive Board for more than 20 years, was named one of Centenary’s original 125 Distinguished Alumni in 1992, and received the Dominick V. Romano Community Service Volunteer Award at the 2016 commencement.