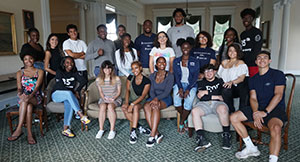 In November 1967, in the aftermath of the previous summer’s riots in Newark, New Jersey’s newly-appointed Chancellor of Higher Education, Ralph A. Dungan, directed a memorandum to the presidents of all of the state’s institutions of higher education. In it, he outlined a proposed program of special assistance to young men and women from economically and educationally disadvantaged backgrounds. The presidents’ response was immediate, widespread, and overwhelmingly favorable. Enthusiasm was particularly marked at those institutions that were participating in the federally supported Upward Bound Program, which sought to help high school students from disadvantaged backgrounds prepare for entry into college.

The following February, the Select Commission on Civil Disorders (the Lilly Commission, established in response to the events in Newark) made its report to Governor Richard Hughes, who subsequently submitted his Moral Recommitment message to the New Jersey State Legislature. The message called for the establishment of a broad range of programs to address the basic conditions the Commission had cited as contributing to the summer’s unrest. Among those programs was the Educational Opportunity Fund/Program, established by legislation sponsored by then – freshman legislator Thomas Kean.

EOP has also been a leader and a linchpin in the higher education system’s effort to increase diversity. While participation is not limited to minority students, EOP sponsors more than one-third of the African American and Latino students at the state colleges and New Jersey’s independent institutions, and over one-quarter of the African American and Latino students enrolled at New Jersey colleges and universities participate in the EOP program. EOP enrolls about 12.5% of the first- time, full-time New Jersey freshmen who enter the state’s colleges and universities each fall.