Hackettstown, N.J., May 7, 2022—Centenary University awarded degrees to 465 graduates at its 147th commencement, which was held as three separate in-person ceremonies on campus. Bachelor’s and associate degree candidates received their degrees during two ceremonies today, while master’s and doctoral degree recipients were celebrated in person on Wednesday, May 4.

Three-time Olympic gold medalist, former US Women’s National Soccer Team (USWNT) member, and FIFA World Cup champion Heather O’Reilly delivered the commencement address at the two ceremonies on May 7. O’Reilly has been an advocate for the USWNT’s successful class action equal pay lawsuit against the U.S. Soccer Federation challenging the existing pay scale for the U.S. men’s and women’s national teams and shining a light on the consistently lower wages earned by the women’s team.

Citing the Olympic motto, Citius, Altius, Fortius—which means Faster, Higher, Stronger—O’Reilly urged the Class of 2022 to be bold in striving for 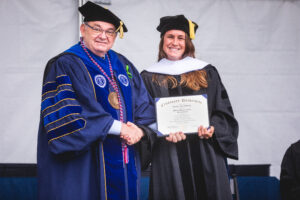 excellence, overcoming challenges, and fighting injustice. “There is no magic formula to being a world class athlete, nor is there one for reaching your own crazy ambitions,” said O’Reilly, who was presented with a Doctor of Humane Letters, honoris causa, by Dr. Murphy in recognition of her extraordinary contributions to international sport and her leadership in championing equal pay for the USWNT. “The best anyone can come up with is: Dream, set goals, and crush them. Then do it again…I have learned this through my athletic pursuits. You can achieve goals, but you will never achieve mastery. Your quest for mastery of the human spirit will never end. The striving truly is the victory.”

Alissa Brianna Mor of West Milford, NJ, who was awarded a Bachelor of Science in Biology with a minor in chemistry, is valedictorian of the Class of 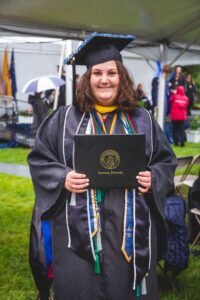 2022. In her valedictory address during both undergraduate ceremonies today, Mor lauded her classmates for persevering with their college education through the global pandemic. Recalling the fall 2020 semester, when in-person classes resumed at Centenary, Mor said, “It was a breath of fresh air to see all of us come together to actually have fun and enjoy ourselves after a long stay-at-home order. We are all sitting here, successful college graduates, but success is not achieved alone. We have each leaned on our classmates, teammates, Greek life brothers and sisters, family, and friends for help and advice when we did not think that we would make it… I would like to end with a quote from Winston Churchill. He stated, ‘Give us the tools, and we will finish the job.’ Centenary has given us all of the educational tools and now it is our job to apply those tools to our future plans.” 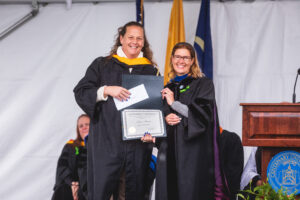 graduate of Cook College at Rutgers University. In addition to teaching in Centenary’s nationally-recognized equine studies program, she is coach of the University’s intercollegiate dressage team. O’Neill is an adjunct instructor in education at Centenary.