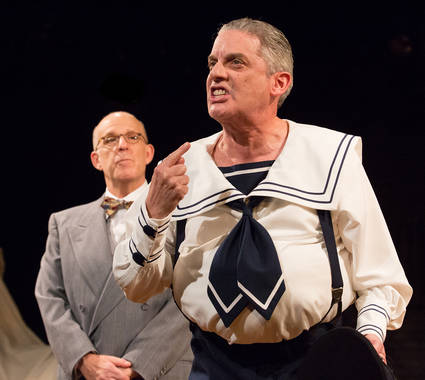 Hackettstown, N.J. – Centenary University’s Professor of Theatre Arts Carl Wallnau has been cast to play Chick Sherman in Funnyman, a world premiere by Bruce Graham. Held at one of Philadelphia’s leading theatres, The Arden Theater Co., The production is currently running until March 6, 2015.

Funnyman sets the stage in New York City, 1959. An aging vaudevillian comic, grasping to remain relevant in the ever-changing world of “show biz,” tries to revive his career with a starring turn in an avant-garde off-Broadway play. Meanwhile, his daughter struggles to uncover truths from her childhood that her father would rather keep hidden. From Philadelphia playwright Bruce Graham, author of three previous Arden works including the seven-time Barrymore Award-winning Something Intangible (2009), comes a new play about a man whose legacy is on the line and for whom comedy is serious business.

“I am really excited to have a role in such an amazing production,” says Wallanu. “The Director, Matt Pfeiffer, has done a fantastic job in helping to put on such a play that shows humor and hardship all in one.”

Carl Wallnau is currently Artistic Director of the Centenary Stage Company, an equity theatre located on the campus of Centenary University in Hackettstown, NJ where he is also Professor of Theatre Arts and Chairman of the Fine Arts Department.

Recent acting credits include The Tempest at the Pennsylvania Shakespeare Festival, Ladies Man at Centenary Stage and Laughter on the 23rd Floor at Theatre 1812 in Philadelphia.

He has directed over 50 productions in regional theatres including Hartford Theatre Works and Musical Theatre Works. His work includes the New Jersey premieres of Below The Belt, Square One and Marvin’s Room and the recent 60th anniversary production of The Mousetrap.

He received his MFA from Rutgers University Mason Gross School of the Arts and is married to his favorite actress Colleen Smith Wallnau for whom he wrote Mary Todd-A Woman Apart. Mary Todd premiered at Centenary Stage and later transferred Off- Broadway to the Samuel Beckett Theatre on Theatre Row.

For any further information on the play please visit: https://tickets.ardentheatre.org

Founded in 1867 by the Newark Conference of the United Methodist Church, Centenary University’s academic program integrates a solid liberal arts foundation with a strong career orientation. This mix is designed to provide an educational experience that prepares students to succeed in the increasingly global and interdependent world.

Centenary University’s main campus is located in Hackettstown, N.J., with its equestrian facility in Washington Township (Morris County).  The Centenary University School of Professional Studies offers degree programs in two locations: Parsippany and Edison, and at corporate sites throughout New Jersey.  The School of International Programs recruits international students for study at Centenary and Centenary students for study abroad.