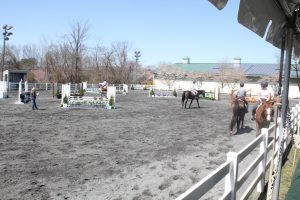 Hackettstown, N.J. – The Centenary University Equine Department is pleased to announce the National Team is the 2016 ANRC Champions and the Novice Team is the Reserve National Champions.  The 39th ANRC (American National Riding Commission) Nationals was hosted at Equine Center in Long Valley, N.J. The Judges for ANRC were Dacia Funkhouser-Johnson of Monticello, F.L. and Todd Karn of Fayetteville, N.Y.

The Centenary ANRC team, coached by Michael Dowling and Tara Clausen finished up not only as National and Reserve Champions, but they were many individual champions, as well. For the Novice Team, Phillip Williamson (Denver CO) was the Reserve Champion and Skyler Laakso (Medford, Mass.) was ninth overall. For the National Team, Grace Weidner (Annandale, N.J.) was eighth overall, Shelby Cashman (West Point, N.Y.) was third overall, and Cody Wooten (Eldersburg, M.D.) was the National Individual Champion.

The American National Riding Commission, ANRC was established in 1977 as a competition based on the American Forward Riding System, consisting of four phases: Written Test (on horse care and management), Program Ride (a flat phase including the USEF Equitation test), Derby and Medal.

“Our Equine Studies students make us proud because of their continued academic achievements in their classes,” stated Timothy Cleary, Associate Professor of Equine Studies at Centenary University and Chair of the Equine Studies Department.  “The great success of the students as members of all of our Equine Teams is extremely exciting and a true testament to the level of commitment and the power of our teamwork.” The results of these national competitions are posted on the Athletics page of the Centenary University website.

ABOUT CENTENARY COLLEGE EQUINE STUDIES PROGRAM
Since 1984, Centenary has awarded Associate of Science and Bachelor of Science degrees in Equine Studies. It is the only four-year institution in New Jersey that grants such degrees, allowing students with a love of horses to transform their interests and talents into solid career opportunities.

Founded in 1867 by the Newark Conference of the United Methodist Church, Centenary University’s academic program integrates a solid liberal arts foundation with a strong career orientation. This mix is designed to provide an educational experience that prepares students to succeed in the increasingly global and interdependent world.

Centenary University’s main campus is located in Hackettstown, N.J., with its equestrian facility in Washington Township (Morris County).  The Centenary University School of Professional Studies offers degree programs in the following locations: Parsippany, Edison, and at corporate sites throughout New Jersey.  The School of International Programs recruits international students for study at Centenary and Centenary students for study abroad opportunities.