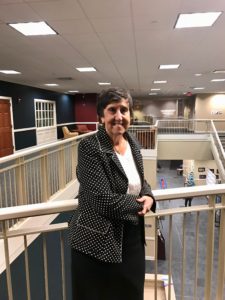 Hackettstown, N.J., November 29, 2018—Centenary University today announced the first phase of its leadership transition plan, following the resignation of President David P. Haney last month. The University is pleased to announce that Dr. Rosalind Reichard, a former President of Emory & Henry College, will assume the role of Interim President for Centenary University effective January 1, 2019. Vice President of Academic Affairs Dr. Amy D’Olivo will be in charge of the University during the month of December 2018.

A member of the Board of Trustees for the past 5 years, Dr. Reichard—who has now stepped down from the Board—is uniquely qualified to ensure an effective transition, thanks to both her intimate knowledge of Centenary University and her proven success as the President of Emory & Henry College, as a scholar and as a consultant to other leading universities.

“I am delighted to have the opportunity to serve Centenary University as its Interim President,” Dr. Reichard said. “Centenary is an institution that I admire and love for its dedication to being an inclusive and collaborative learning community with the interests of its students always a first priority.”

“Having witnessed firsthand the powerful contributions Dr. Reichard has made as a Board Member, we are honored to welcome her as our new Interim President,” said Board Chairman Wolfgang Gstattenbauer. “We know that Centenary University will benefit from the wealth of knowledge and experience that made Dr. Reichard’s seven-year tenure as President of Emory & Henry College so successful. And we are grateful to Vice President D’Olivo for continuing to provide the effective leadership and dedication to the University for which she is so well known and respected.”

This first phase of the University’s leadership transition was developed by the transition task force, which presented it to Centenary’s Board of Trustees on November 29, 2018. The Board approved the recommendation as presented.

Founded in 1867 by the Newark Conference of the United Methodist Church, Centenary University’s academic program integrates a solid liberal arts foundation with a strong career orientation. This mix provides an educational experience that prepares students to succeed in the increasingly global and interdependent world. The University’s main campus is located in Hackettstown, N.J., with its equestrian facility in Washington Township. The Centenary University School of Professional Studies offers degree programs at two locations, Parsippany and Edison, as well as online and at corporate sites throughout New Jersey.