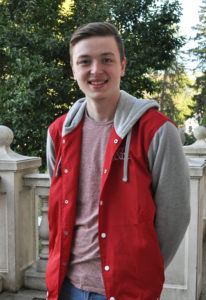 Applying the night before the deadline, Hudson was excited to learn he was the school’s first student accepted into the program.

“I applied the night before on a whim so I didn’t really expect to get in. Only 150 people get in. I got the email at work and it was a little muted. I couldn’t really get too excited because I’m on the clock,” laughed Hudson, 21. He is the vice president of Centenary University’s Enactus program.

“But it was pretty exciting. Enactus is a pretty cool thing and not too many people know about it.”

An international organization, Enactus connects students, academic and business leaders through entrepreneurial-based projects that empower people to transform opportunities into real, sustainable goals for themselves and their communities.

The Centenary University team after winning a trophy for top 48th place (Top 10% in the nation) at the Kansas City National Exposition. (Photo: Photo courtesy of Colin Hudson)

“Enactus is a social entrepreneurship deal. I say it’s making money for a good cause. But that’s the pretty simple thing because we don’t always make money. We sometimes just donate our time. We have a big group here at Centenary and we like to split up and do everything. We have a bunch of projects going on,” said Hudson, a Mount Olive resident.

Every year there’s competitions for the projects. It’s a who can do the best kind of deal. I remember last year there were a bunch of good ones. The second-place runner-up, they went all the way out to India and had a Cow Bank. It was pretty cool.”

The Centenary University Shieldz team showing off their wristband at the Centenary Business Advisory Board meeting. Colin Hudson stands to the right of the table, next to their first Prototype. (Photo: Photo courtesy of Colin Hudson)

Two of the main projects the Centenary Enactus team is working on are Chi Force, an activewear jacket for chemotherapy patients, and a Shieldz band, which detects fatigue for persons in high stress jobs. They’re also involved in smaller projects including Green Pledge, where they clean up rivers, and one involving re-usable plastic bags at stores on Main Street in Hackettstown.

“Chi Force has hidden zippers for the ports for chemotherapy,” Hudson said of the jacket designed in-house which sells for $60. “It’s meant to keep you warm. With chemotherapy, you have to take off all your clothes and put on a gown and if you have the port, you can retain comfort and dignity. It’s pretty nice,” said Hudson, who is studying finance.

The Shieldz band was designed for truck drivers, who are awake for long stretches of time, and anyone working in a high stress job, such as an air traffic controller.

It’s worn on the wrist and uses lie detector sensors. For those who work in high stress jobs, it helps detect fatigue.

Hudson also has to complete an online course titled “Common Sense Economics,” which will help develop the financial skills required in a free market. When he completes this program, he will receive the designation of a Certified Enactus Student and will be recognized at the 2018 United States National Exposition in Kansas City.

“At the national competition for Enactus, you get recognized on stage and you meet with executives for the sponsors at a private reception dinner. They get your resume personally amongst a bunch of other stuff and of course you get a free t-shirt. That was the main selling point for me,” Hudson laughed. “But this is an honor and truly a valuable opportunity that will be beneficial for my future.”